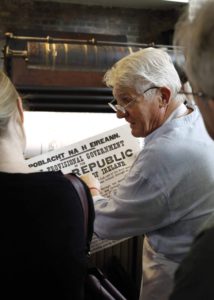 Freddie Snowe, former Press and Publishing Manager of Irish Times Print Facility, he has judged the Irish Print Awards since taking early retirement in 2008 for health reasons. Having spent over 50 years in the industry, he is a printer whose wide practical experience covers sheet-fed letterpress and offset, heatset and coldset web-offset, technical ink sales, print and production management prior to joining the Irish Times in 1986. With the Irish Times he was a regular winner at The Irish Print Awards in the 80’s, 90’s and 2000’s. In London in 2004 The Irish Times won the highly coveted “Newspaper Printer of the Year UK & Ireland Award” at the Newspaper Production Journal Awards and also won the Best Coldset Magazine Award for 5 years (2004-2008) with the Irish Times Saturday Magazine printed in the Irish Times Print Facility, Citywest.

He has been a part-time lecturer in the School of Printing, is a City and Guilds Licentiate in Print and Paper and has given papers at conferences with PIRA in London and Dublin. A former director of the National Print Museum he is a member of the Retired Printers Chapel who demonstrate hot metal typesetting and letterpress printing at the Museum. His interests are family, golfing, motorcycle touring and photography.

At the 2011 Irish Print Awards Freddie was honoured as The Hall of Fame Laureate for his lifelong commitment and contribution to the Irish printing industry.